Tentative Thoughts on Metalepsis in Black by Finn Daniels-Yeomans

Finn Daniels-Yeomans is sharing some tentative thoughts regarding Aryan Kaganof’s difficult yet vital documentary about Fallism in contemporary South Africa, Metalepsis in Black.

Metalepsis in Black – the latest documentary from South African filmmaker-fine artist-poet-novelist Aryan Kaganof – explores the context and philosophy of the Fees Must Fall (#FMF) movement in South Africa; a nationwide student protest demonstrating against rising tuition costs and concomitant racial inequality in the country’s higher education system and wider society.

Keganov blends together responses to the movement from the state and from within the academy – the first via images of police brutality and the second in discussion groups with some of the country’s most prominent thinkers. While #FMF is often criticised (in the film and elsewhere) as a well-worn and needlessly destructive project devoid of thinking or theory, Kaganov focuses on the movement’s productive and creative elements, and specifically on its criticism of the academy as a privileged ‘white space’ divorced from experiences of racial discrimination that the current formulation of the higher education system helps produce (In South Africa, one of the speakers in the film tells us, ‘black people constitute 86 per cent of the population, at the University of Cape  black South Africans constitute only 19 per cent’). 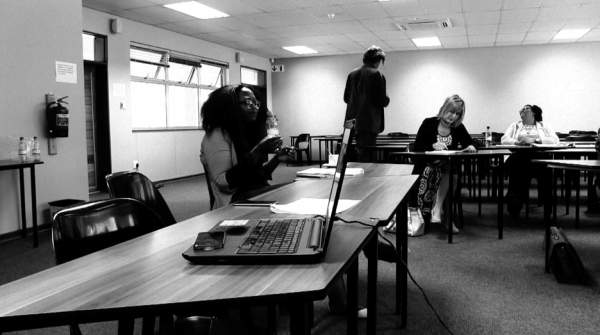 (still from Metalepsis in Black)

We are in a classroom half way through the film, for example, and as we watch academics slowly arrive at a conference, the screams of a white police officer threatening student protesters is audibly heard, and so are that of one of the protesters: ‘You do not understand our pain! Our black pain!’ This jarring juxtaposition between the safe space of the university and the protests outside its walls highlights the relative absence of intellectuals within #FMF, and forcibly foregrounds the crippling impasse that the film is brings to light: how do white scholars respond to experiences of racial discrimination when they work in a system that conditions its production?

The importance of the film is that it not only exposes racial inequality within the (South African) academy and society, or the complicity of white (academic) privileged in light of such structural exclusion -- although these issues are central. It also focuses on and in many ways embodies the philosophy of Fallism. Its destabilising and unsettling style captures the energy, complexity and anger of the movement, as well as dramatizing its efforts to produce something new from what seems to be an immovable old. #FMF, far from an un-theorized exorcize in violence, is a kind of clearing exercise that dismantles the old in order to make way for the new. It is a movement partly driven by transformation and the constant production of alternatives, and the same can be said for Metalepsis in Black. 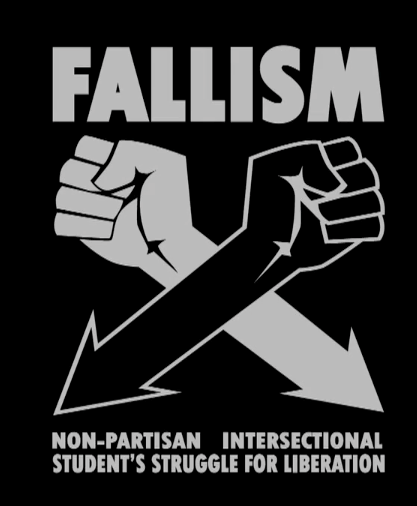 The film, which is shot almost exclusively in black and white, opens with the words ‘This is not the beginning’, and immediately we are introduced to the films disregard for documentary convention (the end titles come half way through). The film’s refusal of a linear structure, whereby the promise of resolution so characteristic of the documentary is abruptly negated, is joined by a number of similarly disorientating effects. There are repeated returns to the same event, jump cuts, and jarring juxtapositions of image and sound, all of which contribute to the film’s attempts to destabilize its viewers.

While the film should leave the white academic at a crippling impasse, it is this impasse that Kaganov’s abrasive, deformative style is perhaps equipped, however tentatively, to respond. His capacity to take the familiar and rearrange it is his own way of create something new out the old, and it is here that the film joins Fallism’s attempts to find some kind of alternative to South Africa’s neocolonial present. 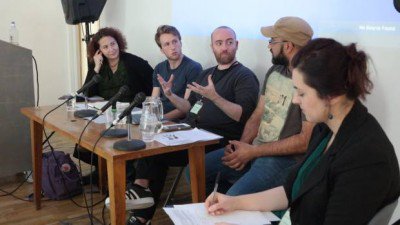 Finn Daniels-Yeomans (second from the left)

He also programme for the Africa in Motion film festival, which is based in Scotland.